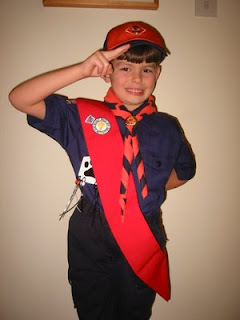 It's been a fun week here in Singapore. Aside from a crazy workweek for Matt, we're jumping into Cub Scouts head first. Melissa is the Den Leader for Den 2 and Jack is loving the meetings and activities.

After waiting for different pieces of the uniform that have been on backorder for almost two months, Jack is finally able to get his whole uniform on. He's very proud to put it on and was even happier to receive his first achievement, the swimming belt loop.

The first meeting of Cub Scout Pack 3017 was on Friday. It's a pretty big pack, with 18 dens and tons of activities. We've already had our pack swim day and coming up in October is the annual pack camp out. Unfortunately, we left all of our camping gear in storage in Texas. You know what that means....more shopping. We were lucky to find tents and sleeping bags on sale at GiantMart on Saturday. It's only a one night camp out in a very nice campground, so thankfully the supply list is small. Of course, we have none of it so the shopping will continue.

I decided (with Melissa's encouragement) that Jack and I would continue with the Cub Scout high we were on. On Sunday, Jack and I picked up the Tiger Cubs book and started working. In one day, we polished off the music, chess and art belt loops as well as the family safety elective. Overall a very productive "Lazy Sunday."

PLEASE, let me tip you!

Throughout Asia in general, I've found the service industries to be very friendly and helpful. The culture just feeds right into the main principles of being a good host. At most stores or other places that require a clerk or attendant wait on you, there's usually a little too much help to go around. You are constantly telling sales people, "No thanks, I'm just looking."

The one exception to this rule is the restaurant industry in Singapore. At first, when you hear that you don't have to tip in a restaurant, you think it's great. You've just saved 15-20% on every meal you eat out. After a while though, you come to recognize the value of tipping. If some 19 year old waiter is going to get the same pay whether he helps you right away or he stands around doing nothing for another few more minutes, you can guess what choice he's going to make.

In very nice places, the service is very good. And many of the places you eat on a day to day basis are self-service food courts or hawker centers. We do however, go to a mid-scale restaurant from time to time. These are the places that let you sit there for 15 minutes before allowing you to wave them down to take your order.

We're pretty sure this is a widespread thing. At first, we thought it might just be because we were white. We have run into an occasion or two where we were clearly ignored in places where we were the only "Anglos", but it's surprising how obvious it is when you're clearly being discriminated against because of your race. (Listen to me, I sound like I'm oppressed or something.) We really do think that it's not a race thing; the service just stinks.

What I'd really like to try is personally starting a tipping trend in Singapore. The next time I sit down at a restaurant, I'm going to hand a random waiter $10 as I walk to my seat and tell him there's another $10 waiting for him if we get good service. Who knows, he'll either take good care of us, or report me to the police.

By the way, this picture is from the meal that pushed me over the edge to write this post. We were eating at a place called "New York" in the Ang Mo Kio Hub. This is not some photography trick. The plate is really that big. Jack and I were going to share the "Meat Plate for Two." It showed up with an entire roast chicken, 6 ribs, fried chicken, sausage, steak fries, corn, cole slaw and beans. We didn't finish it. If Berto ever visits, he and I will have to give it a try. 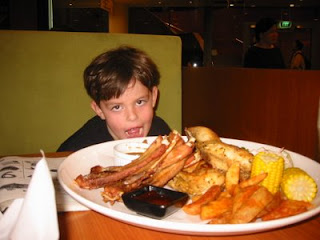 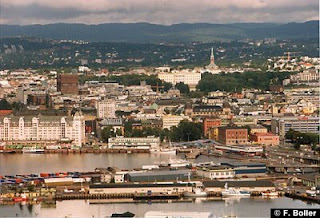 I've been in Oslo, Norway for the past few days meeting a potential client. I have to say that I do like the city. It's small, about 500,000 people, but it's definitely got charm and it seems like people live a relaxed happy lifestyle. Compared to the crowds and pace of Singapore, it's a very relaxing town.

I've been really enjoying the food, as I always do where ever I go. I think lunch today was the first meal I've had since I've been here that I didn't eat salmon. It's like they can't give it away fast enough. And it's delicious. Good cured salmon is available in Singapore, but as you'd expect, it comes at a price. It's been a nice treat.

There was one experience I had here that I didn't expect though. It just reinforced with me how absolutely clueless I usually am.

After a wonderful dinner with our client, my three colleagues and I were walking back to our hotel at around 10:30 last night. As we made our way down the quiet cobblestone streets we started passing by a surprising number of black women who seemed to be just standing around in the cold night air. By their accent that I heard when they were chitchatting with each other, I figured they were from Africa. I was actually thinking to myself, "Wow, there must be a tour here from somewhere in Africa. I wonder if they came on the cruise ship at the dock down the road?"

I was swiftly pulled away from this thought when one of these nice young ladies looked at me and said, "I want to **** your ****!"

Although she seemed very friendly, I don't think she had made this offer out of the goodness of her heart.

If I had been walking down a dark street in Boston or NY and seen women standing on the street corner at 11pm, I would have just assumed they were working. I don't know why it didn't dawn on me here. I guess it was because they were so bundled up for the cold of Norway. Regardless, I need to get my head out of my butt.
Posted by Matt at 7:50 PM 3 comments:

I am a horrible person

A few days ago Melissa and I were talking about our old house in Texas (which has still not sold). The topics ranged through the new roof we need to replace, the bill from the lawn guy, our real estate agent, and hurricane Ike. As the conversation finished and Melissa walked out of the kitchen, it dawned on me. If Ike damages our roof, Allstate will have to pay for the roof we need to replace anyway.

The thought of saving $4000 worth of shingles and labor made me giddy. I struck up a little dance and started shaking it around my kitchen.

Melissa walks back in to witness my performance.

"What the hell are you doing?" she asks.

"If Ike messes up our roof, we don't have to pay to replace it."

"What's the matter with you?", she says. "We have friends there."

"I'm sure Allstate will pay for their roof too," I say.

It turns out Ike was almost all he was cracked up to be. One of our friends actually did have some pretty bad roof damage. Thankfully, no one was hurt or made homeless.

We still haven't got a report on our place yet, but hopefully all is well.

If anyone knows a good roofer in Houston, leave a comment. I'll forward it to my friends who need the help.
Posted by Matt at 9:32 PM 3 comments:

Guest blogger: Melissa (Matt is on vacation. Really he just couldn't think of anything to write)

A few weeks back I joined a group called The American Women's Assoc.; it's a group of women who get together to do all sorts of things (play tennis, bridge, golf, sew, have coffee, scrapbook etc.). One of the things they offer are tours of Singapore neighborhoods. I decided to sign up for the Chinatown tour, mainly to fill my time while Jack is in school. We walked around for three hours with a well informed tour guide, learning many things about medicine shops, Singapore in the 40's, local foods, and some Chinese celebrations. My favorite celebration is The Hungry Ghosts Festival. It's my favorite for two reasons, one because it just passed so I got to see it first hand and two because it's just so crazy. It's a fairly simple holiday. The gist is that the Chinese believe that for 30 days the gates of Heaven and Hell are open and the deceased come back to earth. Why they come back I'm not too sure. If you are among the living you are expected to offer gifts to your dead relatives in the form of paper money. You burn this paper money in red kettle drums and light incense. While on this tour we went into a shop where they sell this paper money, along with paper Coach purses, paper, designer shoes, and paper credit cards . They even had paper passports, in case your relatives in hell want to get to Heaven faster???? The hungry ghosts are the ones that died without family so you offer them oranges, therefore they stay away from the paper money that is meant for only your close family. No, you don't burn the oranges; you place them on the side of the road. Any given day you could open our balcony door and see people burning paper money, placing oranges on the ground and lighting mass amounts of incense on the side of the road.
Oh and one more thing, in case you are interested in celebrating The Hungry Ghosts Festival yourself there is different money for Heaven and Hell. So make a list of dead relatives, figure out where the might be and if they will need a passport. 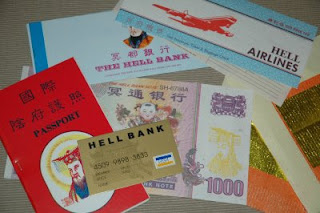 The end of of the world as we know it

Or at least the end of my fantasy football team.