I haven't posted in a while because I haven't had too much to tell you about. The life of a bachelor is pretty boring.

Other than work, the only thing really going on right now in Singapore is that we've got some new friends. A colleague from the Houston office has been transferred to Singapore to work with me here in the engineering department. I've known Dan for about 11 or 12 years in Houston. We started working at ABS within about a year of each other. The interesting thing about Dan joining the office out here is that he seems to be following me around the world.

When I met Dan for the first time in Houston, we discovered that we'd actually grown up about five miles away from each other, just on different sides of the town line. When we met in Houston, it was nice to have another Red Sox fan around to talk baseball with. It's even more so now that he's followed me to Singapore. Singapore isn't exactly what you would call a "baseball town."

I've been showing Dan and his wife Jessica around town a bit and doing what I can to help them get settled in. Other than that, I've pretty much just been eating poorly and drinking beer.

I've found that while I like cooking, making a healthy dinner-for-one when you don't get home from work until almost 8:00 isn't all that fun. Leftovers, hotdogs and take-out from across the street have been high on the list of menu choices these last few weeks. On Tuesday night, I decided to make a big pot of meatballs and sausages in tomato sauce that I could eat for the rest of the week. It turned out well and instead of drinking a beer with my meals, I switched to wine. See...I can be sophistocated.

I don't have much else to tell you about in Signapore, so I'll give you the update from the rest of the family in "the States".

Melissa and Jack got back to the US almost three weeks ago now. They started at Melissa's Mom's place in Virginia. After a while, they go an invite to join her brother Andy and his family in the Outer Banks of North Carolina. They all shared a great house with Andy's family and spent a ton of time on the beach playing in the waves.

After that trip, they headed back to Virginia to pack up again and jumped onto a plane to Houston to visit our friends there. They also used the trip back to Houston to catch up on doctor and dentist check-ups. (Everyone is healthy and no cavities.) Jack got to go to Vacation Bible School at his old school and was very happy to see a lot of his old classmates.

This weekend, Melissa and Jack will drive up to Austin to visit her sister Tory and her family for the weekend. So many cousins, so little time. After that, it's back to VA to wait for me to arrive in the middle of July.

I guess that's all for now. If I do anything interesting, I'll let you know.
Posted by Matt at 2:18 PM 1 comment:

Just a quick post to say that Melissa and Jack are on the ground safely in Norfolk, VA. Her mom picked them up at the airport and they're on the way home.

It's hard to believe that my son has completed 1st grade.

Thursday was the last day of the school year for Jack and the last few weeks have felt like we've been tying up the few loose ends of our first year in Singapore.

We had our last meeting at the school to see Jack's progress through the year. It was kind of neat the way they had set it up. The students were in charge of showing their parents all of the things they had learned. There were a few different stations in the room that the kids would take their parents to. They got to show off their improvement in areas like reading, math and writing, as well as what they learned in their special classes like music, art, and Mandarin. The teachers did a good job of hanging onto work from the start of the year so that you could compare it to the things they're doing now and see their progress. When Jack was showing us his favorite parts of the library, we took a quick picture. 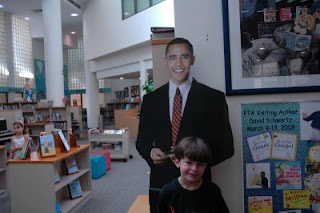 The other thing that finished up recently was Cub Scouts. Jack has now officially completed his year of Tiger Cubs and has also received his Bobcat Badge. He worked very hard to complete all of the required activities as well as completing a bunch of electives and 8 different belt loop awards.

When the bobcat badge is awarded, the kids go through a short ceremony on stage where they get their face painted with different colors that represent things like honesty, courage, and respect. Don't ask me how face paint does this, but the kids all seem impressed and are all very proud of themselves. 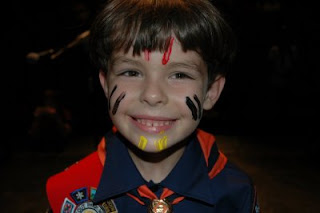 You can't see it in the picture, but Jack's smile is starting to look like all of the other kids in the primary school. It's got holes in it. He now lost both of his bottom front two teeth and his top two are loose. Here's a picture from after he lost the first one on the bottom. 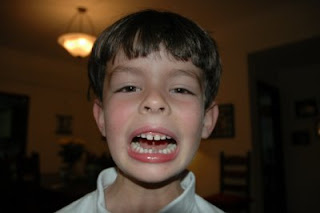 The last loose end to tie up is packing for summer vacation. Melissa and Jack are flying out of Singapore on Sunday leaving Daddy behind by himself to work for the next six weeks while they go the visit friends and swim at the beach. Melissa has been working on packing for about a week and a half trying to sort out what to bring and what she wants to buy in the US. Jack has outgrown more than half of his clothes. The kids clothes here aren't of the best quality, so Melissa plans on just buying most of Jacks new wardrobe when she arrives in Virginia. Even so, she and Jack will be checking-in two big suitcases each, as well as a carry-on. One of the suitcases is actually empty with another suitcase in it so we have extra room to bring more stuff back with us.

Melissa is not really looking forward to the flight. We just found out that the nice people at United Airlines changed the brand new Boeing 777 they were supposed to fly on for an old 747. What that means is, no in flight entertainment system in the back of the seat. Just a movie up on the wall. Not good times with a 7 year old when you'll be in the air for about 24 total hours. We've been preparing DVD players, computers, iPods and the Nintendo DS all week to make sure we have batteries fully charged.

Wish Melissa luck. She needs it.
Posted by Matt at 5:32 PM 3 comments: