Halloween is really only a holiday in the Americas. A lot of cultures have different ways to celebrate All Hallows Eve, but the tradition of wearing a costume and collecting candy is pretty much limited to America and Mexico.

The majority of Singapore is made up of people with an Asian background who don't have much of an idea what Halloween is all about. But they do know that if you put on a costume and visit the American neighborhood on October 31st, you can get a ton of candy for free.

It was like a big street party. They shut down the streets from 7 to 9 and even hired security. There were people at every house in a pack at least 3 deep waiting to trick-or-treat. 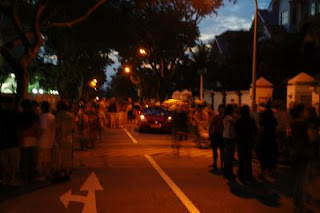 sorry about the poor quality, it was really dark
Melissa stayed home to hand out candy and Jack and I walked around for an hour collecting candy. Jack had wanted to be Indiana Jones, but we weren't able to pull the costume together in time. (It's hard to find a whip in Singapore) He ended up going as a zombie and Melissa made herself a costume too. I'm sure you can guess what she is. 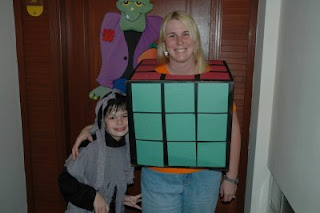 Jack had a great time trick-or-treating (Dad, this is the greatest Halloween EVER!) and we ended up the evening by vising his classmate Ryan's house. Jack liked it there because there were a bunch of kids sitting in the living room trading their candy like baseball cards. He said the most "expensive" candy that everyone wanted was "Nerds" and he was happy he made it out of there with all of his Nerds intact.

It was a great holiday for everyone. I never would have expected our best Halloween to be in Asia.
Posted by Matt at 9:08 AM

Dude, that's nuts. In Sag Harbor all the kids trick or treat during the day by going from business to business on Main Street. I didn't get a single trick or treater at my house. That's for the best though, because it didn't occur to me to get candy and I would have to give them cold cuts or something.

can you imagine my husband handing out Boar's Head Rosemary Ham in little Ziplocs to the poor, unsuspecting Trick-or-Treaters?

I could see Joe handing them little airplane bottles of whiskey.